WAYS YOU CAN HELP PROTECT THE VILLA MARIA

Two-page letter, plus two pages of Topography and Soils Maps and one-page of demolition plan:

Print, add info if you want to, sign and mail! 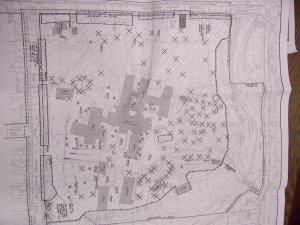 Notice from the New Jersey State Business Gateway Service, stating that the Villa Maria nuns’ organization lost its tax exempt status effective January 16, 2005, due to not filing annual reports for two consecutive years (2003 and 2004, the two years immediately following the closure of the nursing home.)

Summary of Back Taxes owed, by year:

Tax Appeal filed by nuns attorney Matthew McDonnell, alleging that nonprofit status should still apply, even though property had been vacated years before. As of May 2008, we do not yet know the status of the tax appeal.

Original Deed to Villa Maria, when the land and buildings were donated to the nuns in 1938 by Justice and Mary Cooley:

June 2007 – Borough Engineer Daniel Swayze’s engineering report on the developers plans for condo development at the site, including Item 2(d) on Page 4: that slopes in the water run-off area are about 30%, and “grossly exceed” the “maximum allowable slope of 1.7%.”

Traffic Study conducted by developers Civil Engineer Calisto Bertine, finding that the grade for traffic at intersection of Interhaven and Somerset/Watchung is “F,” and since there is no grade lower than “F” adding more traffic (from 225 condos with 450+ parking spaces) won’t have a negative impact on area traffic patterns.

Based on the evidence that the Age Restricted Condo ordinance had been drafted by and for developers, and not by and for the People of North Plainfield, I filed an OPRA request seeking the draft documents and correspondence during the drafting period. Philip George, Esq. of The Law Firm of Eric M. Bernstein and Associates drafted the Borough’s denial letter:

I filed an appeal with the New Jersey Government Records Council:

The Borough filed their response to the GRC Appeal:

The case is still pending; we still don’t know exactly who participated in the drafting of the ARC ordinance, and when and where they met to discuss it.

Robert McNerney’s Environmental Consultant’s Application to Department of Environmental Protection for Extension to Letter of Interpretation (LOI) from 2003 which found “no wetlands” on Villa Maria site:

Letter to nearby homeowners, notifying them of their right to file letters to Department of Environmental Protection outlining their views on development at Villa Maria:

Print & Sign Letter to DEP objecting to development at Villa Maria on grounds that the parcel is in a flood zone within the Green Brook Flood Control Project area, and that demolition and tree destruction at the site will exacerbate existing flood problems:

June 2007 – Defense Brief written by Borough attorneys, arguing that the March 2006 amendments to the October 2005 Age Restricted Condo ordinance were actually a complete readoption. (Judge Ashrafi ruled against the Borough in September 2007, and the Borough appealed. As of May 2008, the case is still pending, and probably won’t be decided until after oral arguments in Winter 2008-2009.

Copies of the notices the Borough published, announcing public hearings on the March 2006 ordinance amendments.

Borough response to an OPRA request for information on how much money the Borough taxpayers have spent to fight Bill Campbell’s lawsuit that successfully overturned the Age Restricted Condo ordinance, and then appeal the trial court decision (appellate decision not expected until winter 2008-2009)